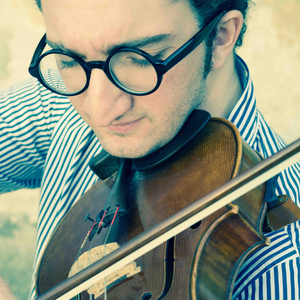 Born in 1995, Antonin Le Faure started playing the viola at 7 years old. Unanimously accepted at Paris National Conservatory (CNSMDP) in Pierre-Henri Xuereb class, he has notably followed Aida-Carmen Soanea’s, Nobuko Imai’s, Bruno Giuranna’s, Gérard Caussé's, Jean Sulem's and Samuel Rhodes's (ex-Julliard Quartet) advices. Chamber music, which is central to his musical life, led him to improve next to François Salque, Itamar Golan and Ebène Quartet and to play with such great partners as Varduhi Yeritsyan, Gérard Poulet, Diana Ligeti, Cameron Crozman, Andrea Obiso, Orlando Bass, the Trio Metral and Elmire Quartet. Fascinated by contemporary music at an early age, he has had the opportunity to educate himself on the contact and under the direction of many composers, such as Kaija Saariaho, Olga Neuwirth, George Crumb, Klaus Huber, Helmut Lachenmann, Bruno Mantovani... Antonin has attended 3 years the Lucerne Festival Academy created by Pierre Boulez and became after this a Lucerne Festival Alumni in 2017 where he took part in projects with the Ensemble Intercontemporain and various conductors : Sir Simon Rattle, Alan Gilbert, Susanna Mälkki, Matthias Pintscher Heinz Holliger, Pablo Heras-Casado... He also participated in a series of concerts with the Ensemble Alternance in tribute to Klaus Huber in Paris and at the Copenhagen Pulsar Festival and also in Festival Manifeste with the Ensemble Modern's under Emilio Pomàrico's conducting. He first-performed in France the Giovanni Bertelli's Viola concerto « Libro d’Estate » for viola and ensemble, conducted by Simon Proust. Fruit of all those encounters and researches, in 2015, he founded the Ensemble Le Pli. Laureate of several national prizes, Antonin received at the age of 15 the “Artist of Tomorrow” title from the Bowdoin International Music Festival (Maine, USA), as well as the 1st prize “Jeunes Solistes de la Sorbonne” during his studies. He was laureate-in-residence at the Conservatoire Américain de Fontainebleau and has obtained the 3rd prize at the Concours International Maurice Ravel. In 2018 he obtained successively the support of the Meyer Fondation and won the Berthier scholarship from the Association of the Members of the French Academic Palms and as well as the Grand Prize of the CIC bank-Michel Lucas. This summer he has been selected to play at the Encuentro de Santander (Spain) and to take part of the Messiaen festival in La Meije (France).

BEHIND THE WAVES (for viola and string orchestra) by Peter MACHAJDIK