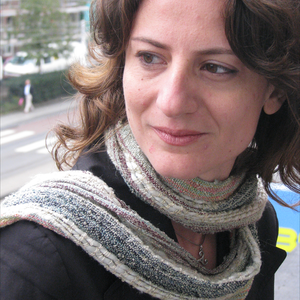 Aspasia Nasopoulou is a Greek composer and pianist living and working in Amsterdam since 2002. Her music world is open, transparent, evocative and complex. She reaches a strong intimacy by frequently integrating visuals, costumes and décor. A large number of her pieces are inspired by poetry from a variety of writers and from past and present times. By working with these texts she creates the concepts for her musical forms of which many are theatre oriented.

Her -over eighty- compositions, which are ranging from solo and ensemble pieces to dance and vocal music, reveal a wide sound pallet. e.g. in the piece Five single breaths for accordion and Japanese sho one can hear the unexpected combination of instruments, blending in sound and impact.
In her collaborations with stage directors, writers, dancers, visual artists, designers and other musicians she explores the boarders of disciplines and genres.Among these : Nicola Hepp, Horst Rickels, Oscar Hahn, Miranda Lakerveld, Micha Hamel, Ninke Brokke, Henk van der Waal, Mehmet Polat, Kristjan Martinson, Michael Tsalka. Nasopoulou is founder member and active in the collective group of composers Co-composing Amsterdam. Their recent project Harbours was on tour in Taiwan and China in 2018.

Nasopoulou is curating concert series of contemporary music and organizing workshops for professional composers. She was modeling and running the workshop series ‘De componist’ (2006-2009) in the historical Huize Gaudeamus (former Walter Maas Huis).
Since 2016 she is coordinating the Composer’s Treat Residency in Buitenwerkplaats in Starnmeerdijk.

In 2012 Nasopoulou received the incentive prize from the MCN & Donemus Publishing Composition Competition with the piece Lelia Doura for the Seldom Sene Recorder quintet, based on cantiga d’amigos. She won in 2014 the 1st Jury and the Public prize in the Tristan Keuris Componisten Concours.
Nasopoulou has been elected as a permanent member of the Union of Hellenic Composers in 2002, and she is a member of Nieuw Geneco. Her music is published by Donemus.
_____________________________________________

Education
Aspasia Nasopoulou studied Piano (diploma with honors from the Conservatory of Piraeus, Greece), Composition (diploma with honors from the "N.Skalkottas" Conservatory, prof. M. Travlos) and Geology (Bachelor of Science from the National University of Athens, Greece). She continued her studies in Composition -with a scholarship from the Propondis Foundation- at the Conservatorium van Amsterdam (Bachelor and Master's degrees) with Wim Henderickx and Fabio Nieder (specialization: contemporary music in combination with contemporary dance). She was guest researcher at University of Amsterdam for the academic year '05-'06 on the subject Musicality of Bacchae by Euripides.