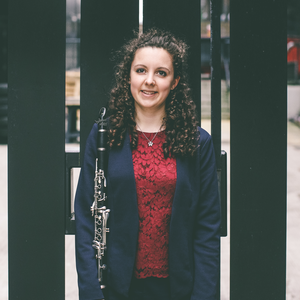 Emily graduated from the Royal Northern College of Music Masters programme with Distinction in 2016, under the tutelage of John Bradbury and Lynsey Marsh. Whilst at the RNCM Emily won the Gilbert-Fell prize for contemporary solo performance, a Music at Beaulieu Award and Third Prize in the Virovitica International Clarinet Competition.

Emily enjoys a huge variety of solo, chamber and orchestral work as a freelance musician. Recent engagements include the Copland Clarinet Concerto in Huddersfield Town Hall with Slaithwaite Philharmonic, the world premiere of Andy Fisher's Bass Clarinet Concerto with Southampton Sinfonietta, a world premiere by Blasio Kavuma in Union Chapel Islington with her ensemble Salford Keys, and work with Everything Everything and The Charlatans at Festival No.6 in Portmeirion. Emily also freelances with numerous orchestras including the City of Birmingham Symphony Orchestra, Hallé orchestra, Royal Liverpool Philharmonic Orchestra, and the Royal Philharmonic Orchestra. Most recently she played bass clarinet in the CBSO's concert and recording of Weinberg's Symphony no. 21, a UK premiere in Birmingham Symphony Hall conducted by Mirga Grazinyte-Tyla.