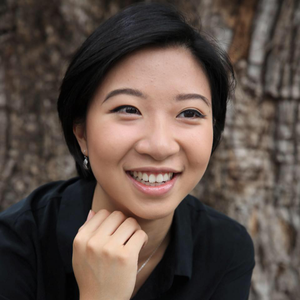 Victoria Pham is an Australian installation artist, composer, and evolutionary biologist. She currently is a PhD Candidate in Biological Anthropology at the University of Cambridge. As a composer she has studied with Carl Vine, Richard Gill, Liza Lim and Thierry Escaich. She is represented by the Australian Music Centre as an Associate Artist.

Pham has been commissioned by a number of institutions such as the Art Gallery of New South Wales, Samstag Museum of Art, and Melbourne Symphony Orchestra. She has featured in several festivals from VIVID to BLEED. Pham is currently the Artistic Director of FABLE ARTS and is the host for the podcast, DECLASSIFY.

As a scientist, Pham has published with institutions such as the Australian Museum and the Max Planck Institute for the Science of Human History. She has fieldwork experience in Australia, Mongolia and Sri Lanka and embarked on a solo fieldwork project at the Paleolithic site of Coves del Toll as an Olwen Tudor Jones Scholar. Her specialisation is in archaeo-acoustic technology and evolution of music. Her artistic and musical work is driven by explorations into the connections between second-hand memory, examining modes of decolonisation, communal story-telling, intertwining electronic sound with acoustic instrumentation, and ecological expressions of construction.

Modes of Transportation (I: Two-Step; 2: Steam and Electricity)

A Meeting of Cars and Aeroplanes

I saw it by JosVagz