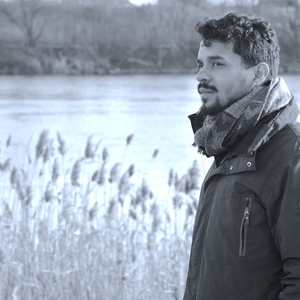 Danniel Ribeiro is a Brazilian composer born in Bahia. Recently, Danniel’s practice has explored instrumental music, developing ways to expand the use of instruments by way of bespoke techniques, preparations, practical sculptural (and found) objects, amplification, and transduced electronics.

In Brazil, Danniel studied with Paulo Costa Lima and Wellington Gomes, composers who continued the cultural resistance of the Grupo de Compositores da Bahia (Group of Composers of Bahia). In 2012, 2014 and 2016, he was awarded the Funarte Prize for Classical Composition and had multiple performances at the Biennial for Brazilian Contemporary Music in Rio de Janeiro. Additionally, he has been awarded research grants in Brazil and Canada, contributing to research projects in composition, music theory and other areas in the humanities.

Danniel completed his Master’s degree in Composition (M.Mus.) at McGill University in 2018, advised by Philippe Leroux.

Currently, Danniel is based in Berkeley (California, USA) where he is a doctoral student in composition at UC Berkeley studying with Edmund Campion, Ken Ueno and Carmine-Emanuele Cella.

Unfold (into a fictive self)