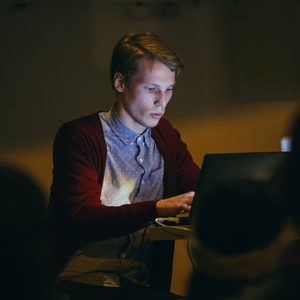 I was born in Lonigo, Italy.
Currently a Ph.D. composer at the University of Birmingham.
Among others, I have studied with Nicola Bernardini, Iannis Zannos, Theodore Lotis, Scott Wilson, Alvise Vidolin and Marianne Strapatsakis. I have also participated to masterclasses with Yan Maresz, Ron Kuivila, Wouter Snoei, Giorgio Klauer and others, ranging from music composition to interactive media and programming.

My works include instrumental and electroacoustic music, live-coding, audiovisual and a short theatrical piece. For almost 3 years, I have been live-coding with the Birmingham Ensemble for Eletroacoustic Research (BEER), premiering works written by Scott Wilson, Norah Lorway, David Ogborn and Julian Rohrhuber. To day, my works have been performed in Italy, Greece, the UK, Germany, France, Canada and the United States.

I have a particular interest in the topic of music theory and its connection to the field of mixed-music. Recently, I have released a major writing titled "Mixed-music theory and the Philosophy of Language", covering philosophy, music composition, musicology and music psychology. Furthermore, I have a soft-spot for the field of Art-Science-Technology, I am a contributor to SuperCollider, and I have been working extensively as a programmer in numerous languages.