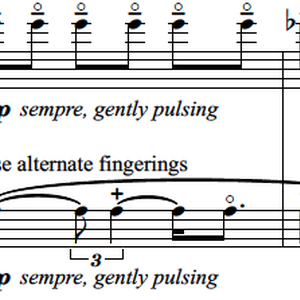 Born in 1991 and raised in London, Michael Taplin has been actively involved in writing music from an early age and studied privately with Dai Fujikura with a grant from the Talbot House Trust. In 2009, Michael accepted a place at the Guildhall School of Music and Drama with a Scholarship where he studied with Paul Newland. In 2015, Michael completed his Masters of Composition with Distinction at the Royal College of Music in London with Simon Holt. Michael's music has been performed by groups such as the Gemini Ensemble, The Composers Ensemble, the Namascae Lemanic Modern Ensemble, the Philharmonia, OSE! Symphonic Orchestra and the London Symphony Orchestra.

Recent highlights include the premiere of Lambent Fires with members of the Philharmonia Orchestra and Diego Masson, in addition to Ebbing Tides (commissioned as a result of participating on the LSO's Panufnik Scheme), premiered to critical acclaim with the London Symphony Orchestra and Fabien Gabel. In 2017 Lambent Fires was selected by the ISCM World Music Days to receive its international premiere. Michael is the recipient of the 2015 Royal Philharmonic Society's Young Composer Prize.

Michael is currently writing a new large ensemble piece for IEMA (International Ensemble Modern Academy) to be premiered in September 2019 at the Gaudeamus Muziekweek. Ebbing Tides is scheduled to be released in early 2020 on the LSO Live Label as part of the third edition of the LSO Panufnik Legacies Series.