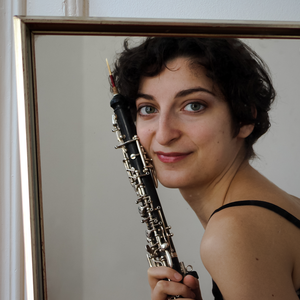 Claire Colombo began oboe studies at the “Conservatorio G. Verdi di Milano” in 2009, in M° Diego Dini Ciacci's class. She has taken part to masterclasses with Jean-Louis Capezzali, François Leleux, Jacques Tys, Francesco Di Rosa. At the Conservatory she has been first oboe in orchestra in different occasions, working with conductors like Gianandrea Noseda and Corrado Rovaris. She has been working with different chamber music ensembles and symphonic orchestras (“La Verdi” di Milano, “Wiener Jeunesse Orchester”, “Junge Philarmonie Wien”). In February 2018 she has been performing pieces by Johannes Maria Staud in Musikverein. In November 2018 she has been performing “Sequenza VII” by Luciano Berio in Wiener Konzerthaus, for the contemporary music festival “Wien Modern”. At the moment, she is studying with Ernest Rombout at the “Musik und Kunst Privatuniversitat der Stadt Wien”.