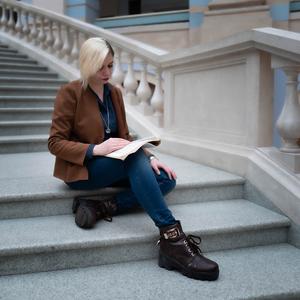 Conductor, composer, writer. She was born in Moscow on 12 December,
1980.
Education:
She graduated in the music theory at the Gnesin State College of Music
(2000), in the composition at the Moscow State Conservatory of
Tchaikovsky (2006) and in the orchestral conducting at the Moscow State
Institute of the Cultures (2016).
The Memberships:
She is actually the member of the Russian Union of the musicians,
the Union of the Composers of the Russian Federation, the center of the
contemporary music in Milan (Centro di musica contemporanea di
Milano). She was the guest jury member of many international music competitions
in Italy, such as: ”Città di Fasano”, “Città di Crispiano”, “Città di Ostuni”,
“M. Ravel composers contest ”.
She was the member of the jury of the international competition of
R. Glier in Moscow.
Awards:
She was awarded by the University of the Free Time of Fasano (Italy)
“With the deep gratitude and friendship.”
Collaborations with the orchestras as a conductor:
– Orchestra of G. Verdi (Milan, Italy), 2010-2012
– “Streicher ensemble” from the orchestra “Berliner Symphoniker” (Berlin,
Germany), 2013
– orchestra “I pomeriggi musicali” (Milan, Italy), 2011-2012
– Philharmonic Orchestra of the City of Piacenza (Italy), 2010
– “Studio of the New Music” (Moscow, Russia), 2006
– Orchestra of the Conservatory of the G. Verdi (Turin, Italy), 2007-2009
– Orchestra of the Conservatory of N. Paganini (Genoa, Italy), 2016
Сhamber orchestra “Academy” (Lviv, Ukraine), 2011
– the lyric opera choir “Cycnus opera festival”, Genova, Italy, 2010-2011.
– the lyric opera and symphony orchestra studio of the Moscow Institute of
Culture, 2019.
– “Edle ensemble”, (Moscow, Russia), 2015-2018.
Conducting competitions:
Winner of the R. Glier international competition, Moscow, 2018, 1st prize
Winner of the international “Caspi Art” competition, Turkey, 2018, 2nd prize.
World Music Competition (Perrenoud foundation), semifinalist, Vienna (Austria) – la
Vilavella, Castellon (Spain), 2019.
Participation in the festivals:
She was the chief conductor of the festival “The young composers of the
World” (Lviv, Ukraine, 2011).
Masterclasses:
2010 – choral conducting a masterclass with the maestro Alexandro Caesar
Carillo (Caracas, Venezuela).
2007-2013: She studied the symphonic, opera and choral conducting at
the Conservatory of G. Verdi of Turin, Conservatory. Of G. Verdi of
Milan, the Institute of Classical Music of C. Abbado, European
Conducting Academy of Berlin with R. Gessi and L. Shambadal.
2018 – Masterclass with Vasily Petrenko, Moscow.
2018 – Masterclass with Simone Fermani, Moscow.
Scholarships:
She won the scholarship from the Ministry of the Culture of Rome for
studying the composition in Genoa (2004).
Composer competitions:
She is the winner of the national and the international competitions such
as: “The Art’s Forum” (former USSR), ”The World of Pushkin”,
“The International meetings of the young musicians in Moscow”,
“Orpheus”. The mystery of the 21st Century ”, the international
competition of the composers for the organ (the international organ
festival) of M. Tariverdiev, international competition “The choral
laboratory of the XXI Century” (St. Petersburg, 2012), the international
competition “Donne in musica”, (Serbia, 2015), the international
competition “Tactus forum” for the young composers (Brussels / Mons,
Belgium, 2015), finalist of the ”Keuris Composers Contest” (2016, the Netherlands), World Music Competition (Perrenoud Foundation), semifinalist,
Vienna (Austria) – la Vilavella, Castellon (Spain), 2019.
CDs:
In the collaboration with the Center of the Contemporary Music of Milan
as the project “Archives of the music of the XXI century” the CD’s was
realized with the pieces “Bela” for the orchestra and “The dream inspired
by the flight of the bumblebee the second before awakening up” for violin
and piano inspired by the painting of S. Dali (2013/2015).
In collaboration with the Arsonic (Mons, Belgium) the CD was realized
with the composition “The Seasons. The Symphony of the singing Trees”
(Les sons d’Arsonic 2015-2016).
The music publishers:
– the cooperation with the publishing house ”Musician Classic”
– the books about the composer: ”The Young Russian Composers”, 2010
The outstanding premieres:
Her orchestral work “Bela” was performed by the united orchestras of the
Bolshoi and Maly theaters in Moscow (2013).
The poet and the writer’s works:
As the poet and writer, she published several books in the collaboration
with the Union of the Russian writers and the International Union of the
Writers.

Her works were translated into Bulgarian and Greek.

The Lake spectral of Eternity