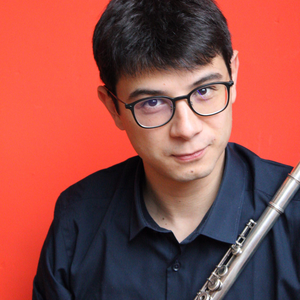 Davide Baldo is the first male piccolo and flute player to be cast as ‘Black Cat’ in Stockhausen’s Licht, for performances of Luzifer’s Tanz in The Holland Festival 2019.
He obtained his degree with honors at the conservatory “F.A.Bonporti” of Trento in 2012. He then moved to the Netherlands to study at the Royal Conservatory of the Hague under the tutelage of M. Thies Roorda (Bachelor and Master). During his studies he met important players, such as M. Rien de Reede and M. Andrea Oliva while studying at the Accademia Nazionale di S. Cecilia in Rome. In 2019 he completed the unique new music course - Master Aus Licht - studying intensely with Kathinka Pasveer, focusing primarily on Stockhausen repertoire.
Davide has also collaborated with youth and professional orchestras, covering the role of flute and piccolo, among which: Orchestra sinfonica delle Alpi, the NJO (Nationaal Jeugd Orkest), Orchestra Giovnile “Luigi Cherubini” (R.Muti), the Residentie Orkest, the Asko Schönberg ensemble, the Noord Netherlands Orkest. This has lead him to take part in many international festivals and he has performed with various Dutch broadcasters under eminent conductors such as Valeri Gergiev, Reinbert de Leeuw, Nicola Paszkowski, Jac van Steen, Antony Hermus and Georg Fritsch. Additionally, he has participated in masterclasses with distinguished teachers like Leon Berendse, Conrad Klemm, Emily Beynon, Peter-Lukas Graf, William Bennett, Denis Buriakov, Bernhard Krabatsch and Sophie Cherrier. Most recently, Davide has cofounded “Kaolin”, a contemporary ensemble that aims to promote new music. Alongside "Kaolin" he is currently working with composers to create exciting and brand new contemporary music.