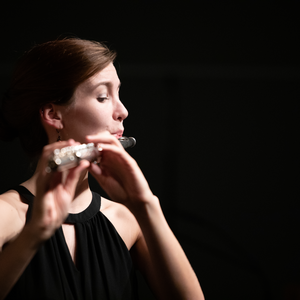 Rebecca is a german flutist, who started her musical education at an early age. She visited the music school in Suhl and attended the special music class at the Goethe – Gymnasium/Rutheneum in Gera. She studied flute at the Robert Schumann Hochschule in Düsseldorf in the class of Prof. Evelin Degen.
In the year 2017/2018 she took part in the Erasmus student exchange program at the Koninklijk Conservatorium Brussel and the Pôle d’Enseignement Supérieur Bordeaux Aquitaine. In 2020 she started her Master degree “Performance Klassik” at the Hochschule Luzern in the class of Pirmin Grehl with a specialization in contemporary music.

Rebecca is interested in contemporary music and is a member of various chamber music groups. She performed at different festivals including the Beijing Modern Music Festival in China, the Warsaw Autumn Festival and the Festival de La Habana de Música Contemporánea in Cuba. In 2021 Rebecca is performing with the Ulysses Ensemble and the conductors Pierre Bleuse, Jean-Philippe Wurtz & Beat Furrer at Manifeste Paris, Fondation Royaumont and Mixtur Festival Barcelona, organised by the Ulysses Network and IRCAM Paris. In the season 2021/22 she will be part of the International Ensemble Modern Academy in Frankfurt.

In 2019 she was part of the Impuls Academy in Graz and played at the Järvi festival in Pärnu and the Höri festival. As a soloist Rebecca has performed with the Philharmonie Gera – Altenburg, the festival orchestra Höri and the Collegium Musicum Greiz.

For her musical abilities she was awarded with scholarships including the Deutschlandstipendium and scholarships by the Anna Ruth Stiftung and the Hirschmannstiftung.

The Lament of King Lear by Helena Lopez PALMA