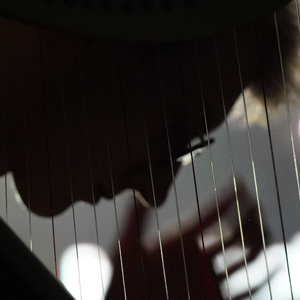 Stef Van Vynckt is a young Belgian harpist, based between The Hague and Brussels, specialising in contemporary classical music. Stef is co-founder of the up-and-coming chamber music ensemble EMC - Extended Music Collective, and has worked closely with leading contemporary composers to further expand the harp repertoire in works that showcase both the delicate side of the harp we are accustomed to, as well as the lesser explored and at times abrasive possibilities that the instrument can possess.

In 2021 Stef gave the world premiere of Floating Fireflies written for him by acclaimed composer Dai Fujikura, as well as the world premiere of Vessels (160935 km) following a collaboration with composer Maja Bosnić. He also commissioned and premiered works for harp solo by, amongst others, Lise Morrison, Frank Nuyts, Tim Mulleman, Renée Vos and in chamber music setting by David Fennessy, Lucien Posman, Vache Sharafyan, Ward De Vleesschouwer et al.
For his latest projects, Stef collaborated on L'acte de respirer with composer Siebe Thijs in association with Muziektheater Transparant, while also being featured on Ear to Ear, an electroacoustic piece by composer Pierre-Yves Macé.

Future projects include a collaboration with multiple Grammy nominee Christopher Cerrone, as well as the recording of a piece by Pulitzer Prize finalist Anne Leilehua Lanzilotti.
He will spend the summer in Frankfurt after being selected for the Young Ensemble Academy of Ensemble Modern.