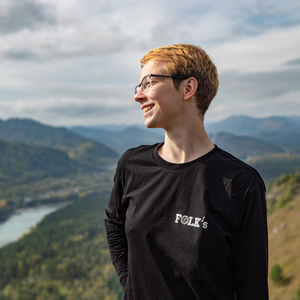 Lizaveta Loban was born in 1997, Minsk, Republic of Belarus.
In 2012, she entered the Glinka State College of Music at Minsk, Musicology Department. When at college, Lizaveta participated in multiple workshops dedicated to various issues of modern music-making. She also took part in numerous concerts organized within and outside the College. In addition, she began to study musical composition with Dmitry Loiko.
After graduation with honors in 2016, Lizaveta was enrolled at the Belarusian State Academy of Music, Musical Composition Department, class of Prof. Galina Gorelova (2016-2019) and later of Prof. Oleg Khodosko (2019-2021). In 2019, she started her membership with the International Guild of Young Musicians “MolOt”. She also became member of the Belarusian Union of Composers after she received her degree with honors from the Academy.
Since 2021, Lizaveta has been studying at the Vaganova Academy of Russian Ballet. Last year, she also started teaching musical theory and musical composition at the Oginski State College of Music at Molodechno.
She is active in concert and charitable programs (Voices of Hope), workshops, international festivals (“Sprava”, “Vierasniovaja Noch”, “New Faces of MolOt”) and music competitions. She also took part in many competitions for composers (and won some of them), such as Hearing Orpheus Today (Malta), Carl Orff Competition (Germany), Open Choral Competition for Children and Youth (Belarus), Dmitry Kabalevsky Competition (Russia), and New Music Generation (Kazakhstan), to name just a few. Besides, she took part in such educational events as the Composers+ Summer Academy (Lithuania), New Classics Academy (Russia), Composer Readings (Russia), Pro-music (Russia), Tsekh (Russia, Moldova, Mongolia), FOLK’s (Russia). In 2019, she became a fellow of the Bogatyryov Foundation (Belarus) and Chairman of the Branch of the International Guild of Young Musicians MolOt in Minsk.
The same year, she first approached sound art experiments at the GUSAC Academy (Germany).
In 2021, she was invited to the CinemaDance laboratory (Belarus) as a composer and improviser.
In her music, Lizaveta pursues an extensive array of genres trying a whole range of contemporary trends in musical composition. She is greatly influenced by the New Folklore Wave. Lizaveta is interested in the interaction of physical processes within the body and the change of mental conditions influencing singing and instrumental performance.