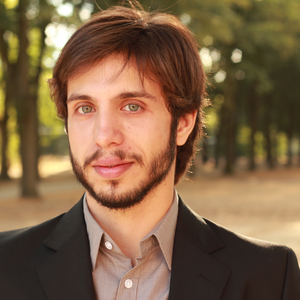 Pianist and conductor (Buenos Aires, 1990), he is one of the most recognized Argentine musicians of his generation. His extensive repertoire of piano and orchestral conducting includes from Scarlatti's sonatas right up to today's music, for which he devotes much of his work. He continues his studies in piano at the National Conservatory of Music of Paris attending the DAI (Post-Master) and specialization in conducting contemporary repertoire with Jean Philippe Wurtz at the Conservatory of Strasbourg. At the same time, he continues his studies on traditional repertoire attending a Master degree in conducting at the Robert Schumman Hocschule in Dusseldorf under the guidance of Rüdiger Bohn.

As a conductor, he has conducted the National Symphony Orchestra (Argentina), the Danubia Orchestra Obuda (Budapest), the Colón Theater Academic Orchestra, the Neue Philharmonie Westfalen, Bergischen Sinfonikern, Anhaltische Philharmonie Dessau in Germany, the OTM Orchestra in New Jersey, the Ensemble Divertimento (Italy), the Filarmonica Dinu Lipati (Romania), the Ensemble du DAI Contemporain of Conservatoire National de Paris, the Ensemble de Musique Contemporaine de l’HEAR, the Orchestra Symphony of Bolivar (Colombia), ensembles Sargo and Nomads (Switzerland) and the San Martin Symphony Orchestra (Argentina). He is also, the assistant conductor of the orchestra of COGE in Paris, He was the principal conductor of the Envol Orchestra of Paris during the seasons 2017 and 2018.

In 2017, he made his debut as a conductor in the US conducting his first opera with the Opera Theatre of Montclair in New Jersey presenting a full production of La Cenerentola by G. Rossini.
In 2014, 2015 and 2016 he toured the U.S, playing in New York, Washington D.C, Chicago and New Jersey.

He has been chosen as an active conductor at th Peter Eötvös Masterclasses in several times, at the 57th Weimar Meisterkurse (Germany) taking lessons with Nicolás Pasquet and at the V Seminar in Orchestral Conducting with Glenn Block (USA) organized by the Colon Theatre in Argentina, where he conducted the Youth Academy Orchestra of the Colon Theatre. Furthermore, he has taken masterclasses with Mtro. Rüdigher Bohn (Düsseldorf), Gregory Vajda (Hungary) Joachim Jousse (Paris), Claire Gibault (Paris) and Eckhart Wycik (Weimar).
He has taken Master Classes with prestigious teachers as Akiko Ebi, Filippo Gamba, Jerome Rose, Emanuel Krasovsky and Nina Tichman among so many others.

In 2014, he co-founded with Alex Nante the Ensemble Écoute, dedicated to contemporary music with which he conducted more than 20 concerts in Paris presenting several aesthetics and movements from new music. This ensemble is supported by the Paris City Hall, SACEM, SPEDIDAM, UNESCO, Ibermusicas and Cité Universitaire de Paris, among others.
Thanks to his strong engagement with the new music made him, he has premiered a large number of pieces and to work side-by-side with several composers.

He began his studies at the age of six at the Collegium Musicum with Andrea Gallo and then at the Conservatoire of Buenos Aires. At the National University of Arts (Argentina), he has got his Bachelor degree in Manuel Massone Class and he took Conducting lessons with M. Benzecry. Before continuing his preparation abroad, he studied with the prestigious pianist Bruno Gelber. In 2015, he obtained his Master degree of Interpretation (Biennio Specialistico) with honors at the Udine State Conservatory “Jacopo Tomadini” in Italy, where he studied with Massimiliano Ferrati. Then, he moved to Paris where he studied for two years with Rena Shereshevskaya taking the “Cycle de Perfectionnement” at the Conservatoire de Rueil-Malmaison and he obtained DEM in Conducting at the Paris Regional Conservatory under the guidance of Adrian McDonnell.