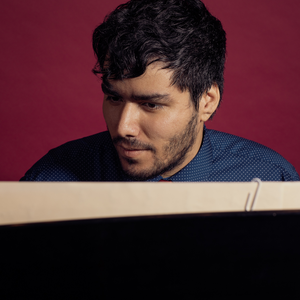 Composer and cinematographer J.E. Hernández (b.1993) is a Mexican born, Houston based composer focusing on elevating personal & cultural narrative through his work. J.E.’s has been featured by distinguished ensembles and organizations such as the Brazil National Orchestra, Apollo Chamber Players, Foundation for Modern Music, Exalted Arts, and in a wide variety of films, both in the United States and abroad (Slovakia, Mexico, U.K.). Currently he is pursuing his undergraduate degree in music composition at the Moores School of Music, where he is studying with Marcus Maroney as his primary composition instructor.

J.E.’s work focuses on both traditional and multi-disciplinary mediums, and he has collaborated with directors, choreographers, and playwrights. His interest in incorporating his cultural heritage both in native Tabasco, Mexico, and in Houston, Texas led J.E. to found a non-profit arts organization for social causes named Concertia. The mission statement “To empower social causes through the prism of new music and multi-media art” resonates with his goal as a composer to engage the community at large with his work. The organization continues a healthy existence with an upcoming season and past performances.

Recent and upcoming projects include Xul, a narrative focusing on the 60 days J.E.’s spent in a deportation detention center in 2013, commissioned by the São Paulo Contemporary Composer’s Film Festival in collaboration with the Brazil National Orchestra, Mary’s Song, commissioned by Exalted Arts for multi-disciplinary medium, Portrait, a full-length indie feature film in collaboration with Houston based-artists, and SHEER, a piano trio/film piece to be premiered alongside Ravel for a WWI memorial.