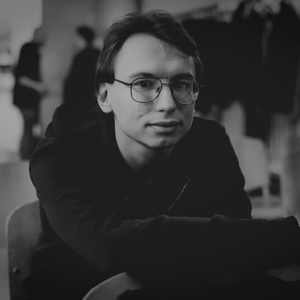 His current artistic research is primarily focused on human perception of sound both within and outside of a musical context in relation to affect theory. Dmitry explores the sonic environment of human habitation through the field recordings and transforms the latter into his music pieces. Another point of his musical interests lies in spoken word and language as the point of departure for a musical thought, which is at the same time influenced by years of accordion practice and free improvisation. Through an ongoing contemplation on memory and the process of forgetting, Dmitry reflects on the European and non-European tradition in music history in search to understand the present reality through compositional tools and musical discourse.

Dmitry studied composition at the Moscow State Tchaikovsky Conservatory with professor V.G.Tarnopolsky, from where he graduated in 2017. Additional studies include master classes with Oscar Bianchi, Fabien Levy, and Carola Bauckholt at the International Composers Academy in Tchaikovsky city in Russia in 2016. Since 2017, Burtsev has taken on the role of assistant of the composer Sergei Newski, which provided Dmitry with invaluable experience and advanced his professional skills.

In 2017, he won the Open Space competition at the Museum of Cosmonautics, where he got a chance to collaborate with the Zykina State Ensemble of Russian Folk Instruments. In 2020, he became a laureate of the Russian Music 2.0 program and wrote the piece Revisité for MCME.

Dmitry is also the author of interdisciplinary musical performances, in which he brings together performing arts, free improvisation, collage combinations of contemporary art- and popular music and field recordings. Most of these performances resulted from a collaboration with the Vadim Sidur Museum (Moscow).

侍従-The scent of the autumn breeze by Tomoya YOKOKAWA